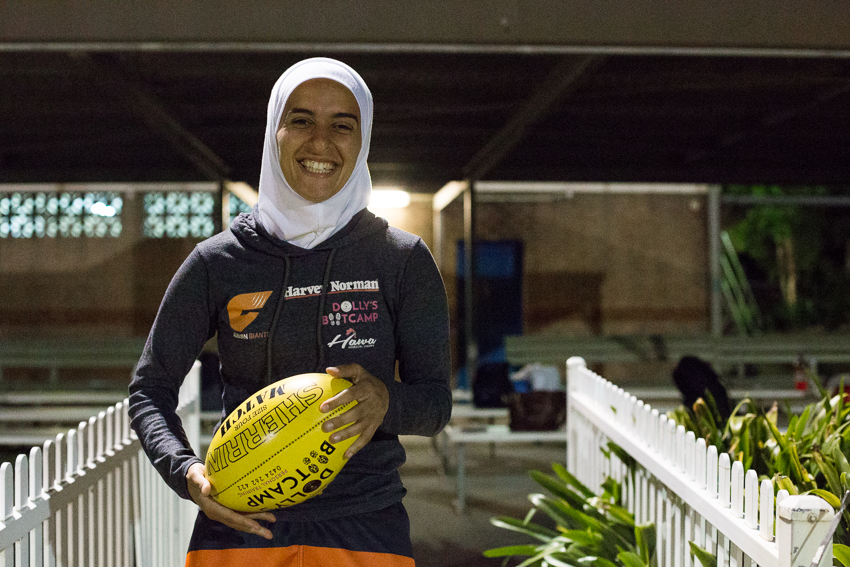 When Amna Karra-Hussan decided she wanted to play AFL there was one issue that would stop most people in their tracks – no women’s AFL team existed in Western Sydney. Not seeing it as an issue, Aman decided to start her own and is now President of the Auburn Giants who have just entered their seventh season with all signs pointing towards a premiership for the club in the not too distant future. On a chilly autumn evening The Westies stopped by a training session to chat with one of the most warm, endearing and motivated people you are likely to meet. We chatted about how Amna started the club, the importance of women playing sport (far more than exercise) and the doors that open for you once you start knocking. 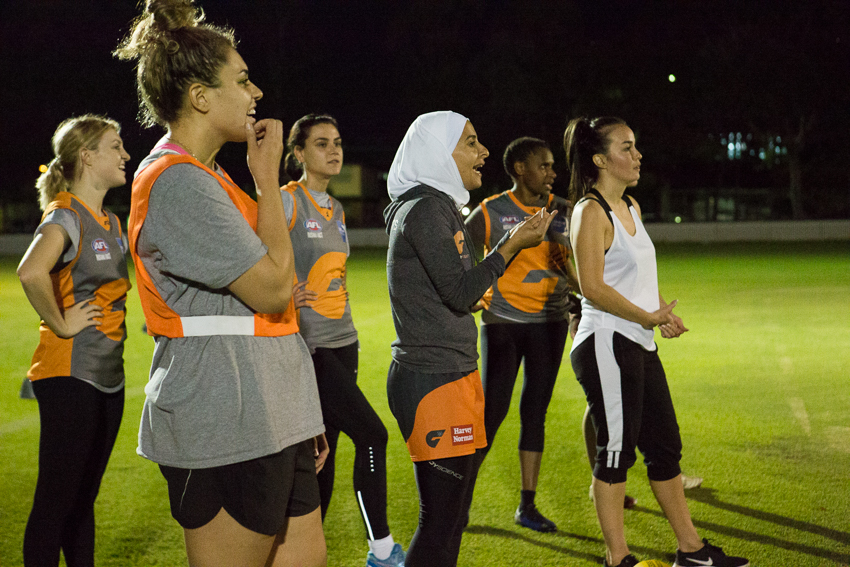 We want to create a pathway, so that girls get the opportunities that the boys are getting, and I think it’s outrageous that we don’t have those things set up for girls.

The Westies: So tell me why decided to start an AFL team?

Amna: Two reasons. One, when I was growing up, I used to notice that women’s teams in sports in the local area  would start and stop, they were never consistently around. They played for one, two years and then they were gone. I often wondered why that was, because there were plenty of men’s and juniors for boys, but very little for women and girls.

The other reason was just opportunity, I came to an AFL Game, here at Mona Park, and my cousin was playing. I watched the game, and thought this is what broader Australia relate to, this is their game, and I’m born in this country, and I don’t even know what it is.

So, if they call this Australia’s game, well I’m an Australian and I want to know what it’s about. I want to leave my footprint on the game, and that’s what I did.

The Westies: And then what? Enthusiasm is great but how do you actually go about starting a team?

Amna: I just started by messaging every single girl that I know, and said “Hey, let’s play footy, do you want to come have a run?” Girls came in groups of two, and three. It varied from week to week, We had about 30 to 50 girls a very big group of committed women, who were like “Yes, we’re going to give it a go!”

We didn’t have a coach or balls for the start of it, we just had one of our friends, who was a recently qualified PT, she was quite young, 19. She would run a fitness training, and over time, it was like “Oh, we really need to buy a footy.” So I called the multicultural program’s manager at the AFL and said, “I need to buy a ball-bag. Where do I go?” And they were really supportive, the AFL multicultural programs manager bought me my first ball bag for the team. I had no idea how much a footy cost. In later years, when I started ordering equipment, it was like a $100 a footy. I was like “What the hell!” I couldn’t believe it. How shocking is that, hey? It was so expensive.

The Westies: The Auburn Giants are now in their seventh season, why do you think the team has been so successful?

Amna: Because it’s led by a woman, for women. The reality is, if the president of a footy club is a man, unless he has a daughter, he’s not going to be fully invested. It’s not to say that all men don’t care about football for women, it’s just that I think you naturally cater to the group that you’re part of. My priority in starting a women’s side, and then growing the club, first we have a women’s team, next we’re doing under-eighteens, and creating a pathway for teenagers. Then we’re doing under-fifteens, and next I want to start under-twelves. So, from the age of five, I want girls to go “Oh, there is a complete pathway, it doesn’t just stop”, which it does, in different codes. 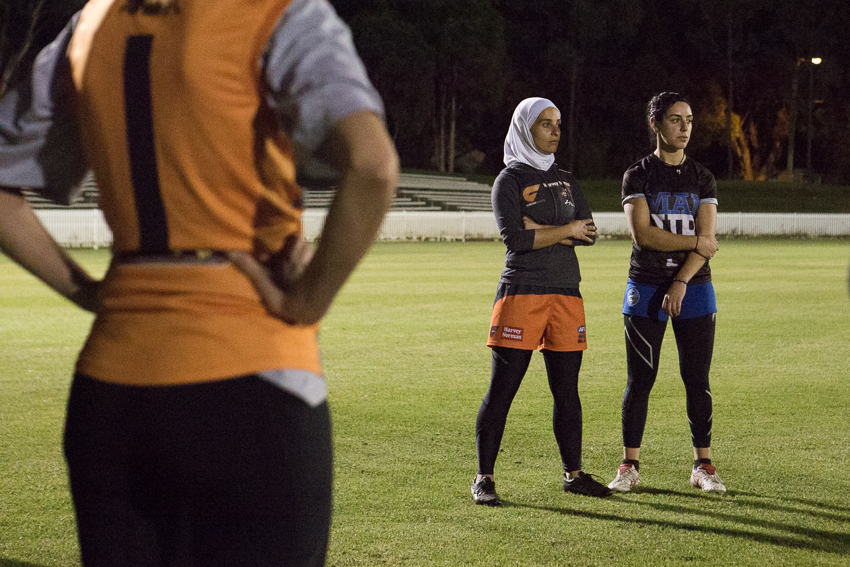 I didn’t think that it’s going to be this. Let me tell you, I didn’t. I just thought it was going to be park footy

The Westies: Why do you think it’s so important to have that pathway?

Amna: Sport is incredible in what it can do for community development, for personal development, for social development. It’s difficult to put in a metric system and say “Yes, there was a 90% improvement here!” You can’t measure things like improvement in self-confidence, in self-esteem, but you can see those things in the tangible, and they really make your heart expand with warmth, and you go “Oh my God, this is incredible!” When I met this person they weren’t confident to speak in public, or in a group, that was the quietest person, and now they’re the captain, which happened here in Auburn.

Last year, we appointed three captains in the leadership group, all were shy, less vocal people in the group. All had great football skills, and a lot to contribute but they were never going to be people who just stood up and said “Hey, everyone, you need to listen to me!” So we made them the captains. And we watched them transform over 12 months into confident, articulate, more engaged people. And it was awesome to watch.

The Westies:  Did you have a vision of what the team would be when you very first started it?

Amna: I didn’t think that it’s going to be this. Let me tell you, I didn’t. I just thought it was going to be park footy. That’s it. I knew that the AFL had a vision for an AFL women’s elite competition by 2020, so I knew that I wanted to ensure that we were in the position to really support talent but certainly in that first year, it was just park footy. It was like “Let’s go out there, give it a go, have some fun.”

Then 2012, I thought let’s make sure that we’re in a financially viable position, and get some sponsorship. By 2013 we were in a good position to align with GWS, because that was a good strategic decision for our brand. By 2014, we had a major sponsor in Harvey Norman. In 2015, we were invited for the following year to move into premier division, we did that recognising that our talent would improve, and get better opportunities to play at the elite level. Never did I expect that the AFL would move the goalpost for their competition to 2017, rather than 2020. The timing, and the decisions that I made at critical points, basically every year, all lead us to be in a position that we’re in today.

In the first two years of footy, we lost nearly every game, bar one or two. We kept our heads up,  because we were happy just to play in a competition. In 2017 I guarantee there’s going to be lots of wins, we’ve done the hard work, we took the losses last year, and the girls – despite the losses – you watch them play football, they’re better footballers for it. 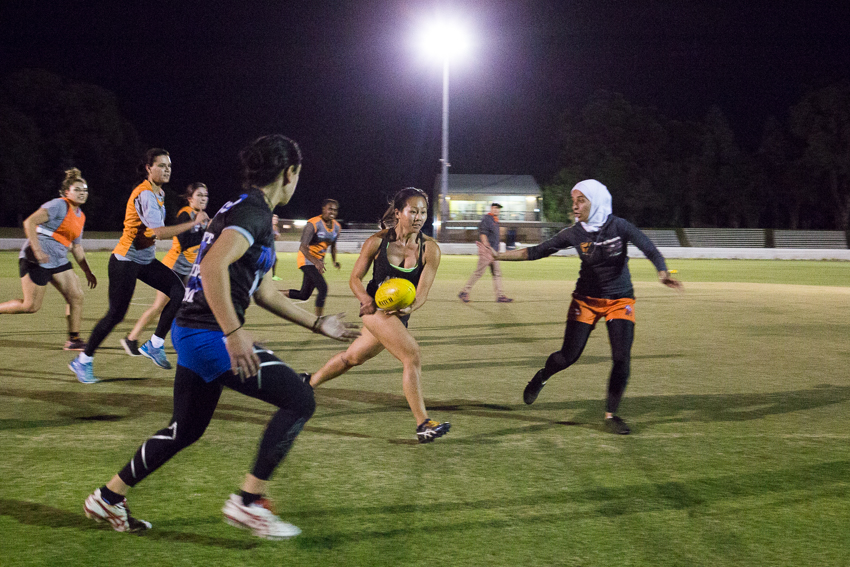 The Westies: Where would you like to take the club next?

Amna: We have just started an under-fourteen’s boys team this year. We did that for two reasons, maybe three. One is my little brother, he’s been traveling with our footy team since the day I started it, and he knows all the girls, he knows all the positions they play, he loves it. And he’d always say “I want to join, I want to play”.  But in what time was I going to take him? My sisters work, and my parents have their own commitments, so it was like “Okay, well if I can’t take you to the club, I will start you a side.”

The other part of it was— how do you ingrain attitudinal change that is longer term, how you address sexism and patriarchy and misogyny? What is more powerful than a women’s club raising these young men? My brother says I play full back because I’m just like Namin. He doesn’t say “I’m just like Adam Goodes, or Dylan Shiel or Adam Treloar”. He says, “I’m just like Nams.”

The boys are looking at women, and going “I play football like her, and she’s so cool, and she’s so awesome.”  That’s incredible, right? For me, that is how you create the change at the community level and then it filters to the whole world.

Then the other thing that really cemented those two things was I lost my other brother in February. He died in a motorbike accident. He was 24. My football friends were amazing, they were over my house every day supporting me. They were there, and I could just sit on the couch and not have to think, or function. That support, it’s because I invested so much in these girls, and in this club, they are paying it forward. I realised “That’s what my little brother needs. He needs a really good support network.” And football clubs are fantastic for that. 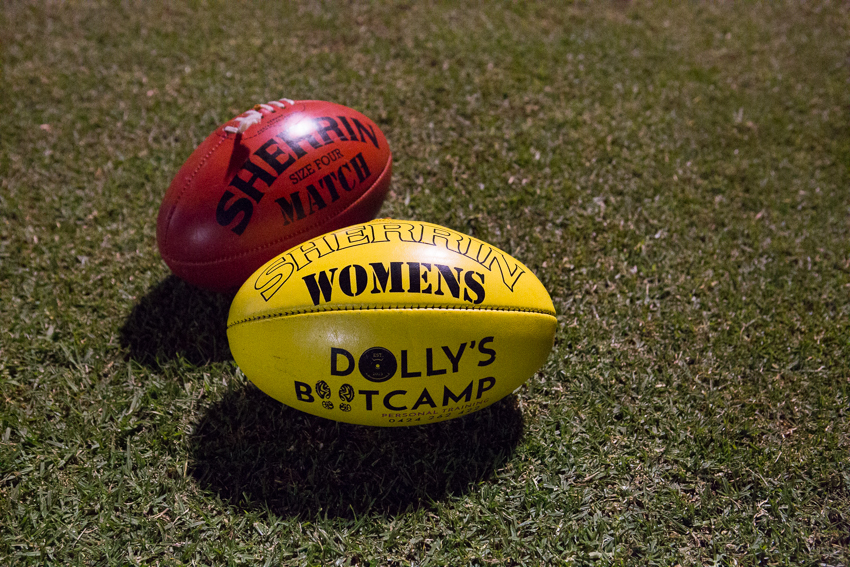 To just know that people feel like I’ve had such a significant impact, that they recognise my work across the country is really sick.

The Westies: You’ve had some great opportunities open up because you started the club, what are some of the highlights?

Amna: Definitely playing at Spotless Stadium, that happened as part of our partnership with Harvey Norman. It is was unreal, you run on thinking “professional footballers play on this field!” I felt all the girls lift and want to prove that they are the best footballers, and that they deserve to play on that field. I would definitely rate that in the top.

I’ve received heaps of awards, which have been incredible, because I’ve been exposed to completely different audiences. I received a Woman in Sports award from Women’s Health Magazine.  There were Olympians, and elite athletes at the event, and to be recognised for my contribution to community at an event where there were so many people you grow up watching, like Susie O’Neill, Caroline Buchanan, the Rugby 7’s women, they’re the ones that are elite, right? I’m just running a community football club, hoping to pave the pathway for talent like that, that was really special.

Then I was nominated in the Australia Day awards, and I didn’t even know— I got a call, and I was like “What are you talking about, sorry?” I was really shocked, and there aren’t many times in my life that I’m speechless, but I was. I said “I’m really talkative, but I don’t know what to say to you, I’m sorry.” I was a finalist in New South Wales, and I’ve got to go to the ceremony on the harbour on Australia Day, and there were thousands of people at Darling Harbour. Your boat goes around, and you’re waving at all these people, and they’re just clapping for you, and they’re really celebrating you. I got so emotional, I thought “Oh, my God!” So many people go unrecognised for the work that they do, and I’m having this incredible moment with all these wonderful people who were nominated in New South Wales. It was amazing.

The other award that was really amazing was the Western Sydney Uni one I just recently got. I was given a community fellowship in recognition of the work I’ve done in Western Sydney in community engagement, and for enhancing the social and cultural fabric of Western Sydney. I just thought I was going to University, and the Uni was going to give me this award, and before I knew I was sitting up there with the chancellor on the stage, and I was like “This is not what I was expecting!”