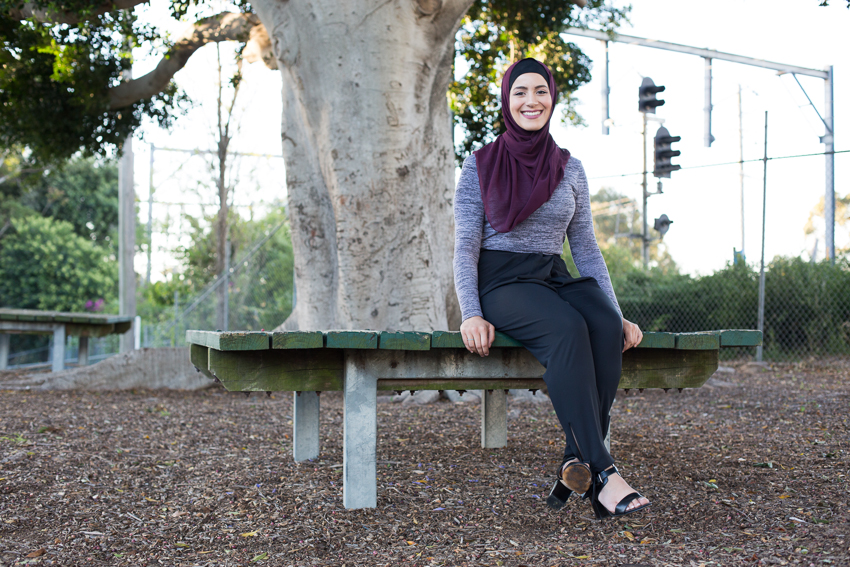 A visit to Bankstown Poetry Slam had been on the radar for quite some time, last month I finally made it there. It was my first experience of watching people perform poetry and I very quickly figured out why it’s called a slam. The words being spat out by the brave performers hit you with force and an energy that embeds them deep in your conscience. Poems about lost grandparents, lives yet to be lived, isolation, love – topics so common no one in the room would struggle to understand them, yet the room was full of people who were less then common. It was a room full of diversity, every age group was represented, the gender split was even. There were hijabs and hair braids, beards and bare skin. It was a united nations of people whose common goal was expression. There was no bar, no drinks were served yet the energy was intoxicating. It was thick with joy, with acceptance and support. I left the place on a total high waiting for my next hit.

Before the night started I managed to catch the beautiful Sara Mansour, one of the co-founders of Bankstown Poetry Slam for a quick chat about how BPS came to be and the unexpected rewards it has brought.

The points are not the point; the point is poetry.

Sara: Bankstown Poetry Slam is an initiative that is supported by Bankstown Youth Development Service here at the Arts Centre. We get together on the last Tuesday of the month, and we have a poetry competition, performance poetry. The rules for the slam are simple: a three minute time limit, props are not allowed, or anything that might boost up their performance, that’s it. It’s quite a laid back kind of atmosphere, we say “The points are not the point; the point is poetry.” that’s actually a famous quote by Allan Wolf. BPS is about adding an exciting, dynamic side to a really traditional art form.

The Westies: Were you performing poetry before you started BPS?

Sara: Yes, my first performance was in November 2012. I had been inspired by a poem that I saw on YouTube, it was Rafeef Ziadah’s poem, Shades of Anger. In it, she says, ‘I’m an Arab woman of colour and we come in all shades of anger.’ And that just spoke to me so much, and I really felt an affinity with her, I just loved how strong and, and motivated, and powerful she was, and so, I started writing my own stuff. I was at a time in my life where I was really kind of conflicted, I have this Muslim identity, and a bit of Australian identity, and there is a lot of external factors, and being young, and, just like war and all that kind of stuff, that was challenging my domain. I really wanted to show the world who I was, and destroy the labels and disburse those ideas and stereo types surrounding what a Muslim woman is, or what a veiled woman is. 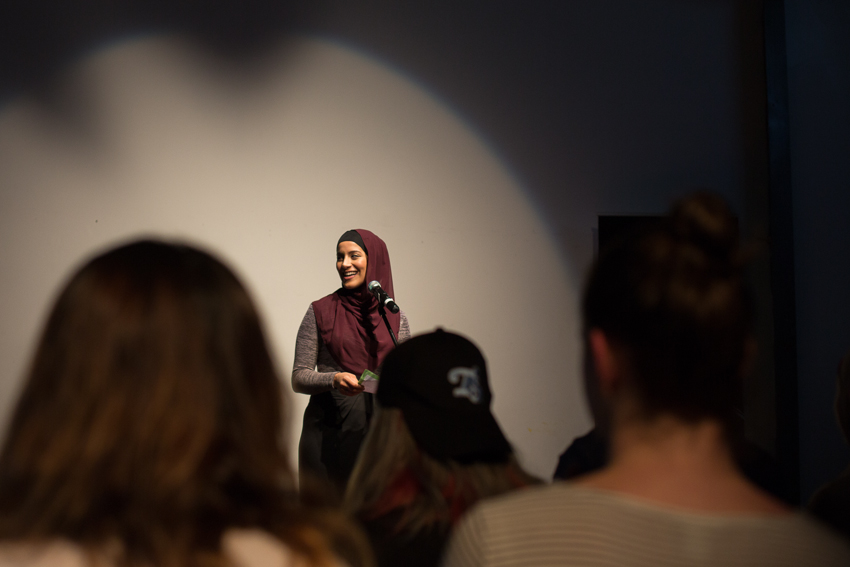 Bankstown Poetry Slam was born out of a bitch session, basically.

The Westies: Why did you set up your own event?

Sara: My friend, Ahmad Al Rady and I were poetry buddies, we would go to poetry events, most of them were in, the city. Ahmad lives in Liverpool, I live in Punchbowl, and it was so frustrating, to drive down all the time.

Bankstown Poetry Slam was born out of a bitch session, basically. We were just sitting there, and I then I was like, “oh I can’t believe were driving to Newtown again, I wish that there was a slam here. Blah, blah, blah.” And then we’re just like, oh my God, we should just start one.

And that’s basically how it started. It was a very spontaneous thing. We came and spoke to the Art Centre here, and Tim Carroll from BYDS was really accommodating, and we just went from there. We decided to trial it in February 2013, and there were about 80 people there, it was such a good turnout. We were expecting thirty!

It started to grow really organically, it’s a monthly event now, its free. I was very adamant on having it a free event, because I feel like arts aren’t as accessible as it should be. Especially in Sydney, so it’s always been a free event, and, yeah, it just started growing and growing. About two years ago, it started drawing in a regular crowd of two hundred and fifty, to three hundred people. It’s been a crazy experience, because it was always a passion project, and now it’s, grown into something that’s mammoth and more than all of us, it’s very rewarding.

The Westies: When you were travelling to the city, did you find a difference in what people were speaking about?

Sara: Yeah. Absolutely. I found that the experiences people were talking about, were just kind of, I don’t know …not contrived, but I felt so detached from the topics that they were talking about. You know I couldn’t relate to those sorts of problems, waking up, being hung-over, all that kind of stuff. I think that the beautiful thing about Bankstown is it’s brought up all these new narratives. You are hearing about the refugee experience, and hearing about the migrant experience, second generation, third generations, that identity crisis, and, a lot of really strong political poems. That’s the kind of stuff that, our communities, are passionate about, because it directly affects us. 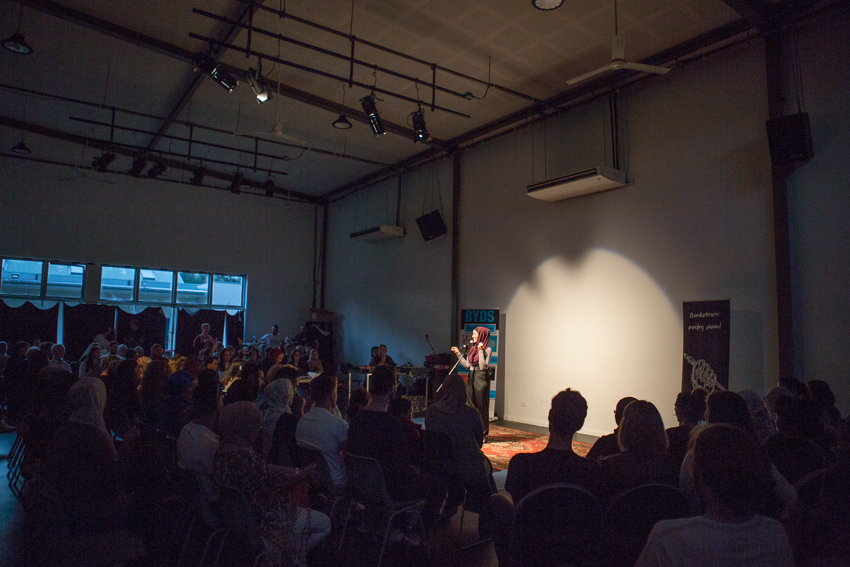 I never thought that I would be successful in getting a job at a good [Law] firm, because of my hijab.

The Westies: What do you think is the best thing, it’s done for you personally?

Sara: I think it’s just given me a lot of perspective, and I am so grateful for that, because I feel I’ve really grown as a person, in my personal and professional capacity. I’ve just really grown, and I’ve developed and become more resilient, because I’ve had these interactions with all these amazing people. I have learned new stories, and I have shared stories, and it’s given me a sense of community that I’ve never had, growing up in this area.

The Westies: Has it opened up any opportunities to you, that you never expected?

Sara: Yeah, absolutely. I’m studying a law degree and I actually got my job at a firm, through poetry. I met someone who, introduced me to someone else, and that lead to my job. For me that was just amazing, I never thought that I would be successful in getting a job at a good [law] firm, because of my hijab. It’s because of my hijab that I did. Because I got into this poetry stuff. I feel so lucky, it’s quite serendipitous the way that things have all played out.

Bankstown Poetry Slam is held on the last Tuesday of every month at Bankstown Arts Centre with the exception on December when The Grand Slam where the best winners from each month in 2016 battle it out for top spot, held at the Art Gallery of New South Wales, this year it’s on December 11th book your tickets here, now!